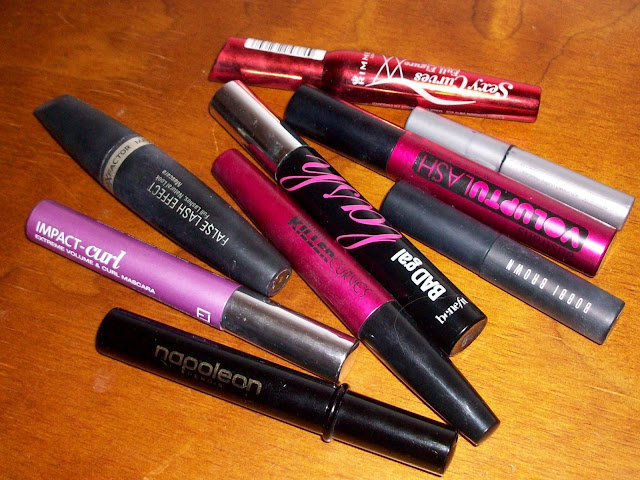 Firstly apologies for being such a bad blogger lately. I have so much I want to write about but I just can't seem to sit down long enough to write plus I have been busy with work and just life in general. I also decided to paint my bedroom this past weekend. It turned out to be harder than I thought and I realised I own a lot of 'stuff' and it takes ages to move it around.

In May I was very bad at emptying products. When I went to the bag on the back of my door that I chuck my empties in during the month, all I found were mascaras. I went through my mascaras at the start of the month and chucked any old, finished or unloved mascaras. So this post will be one solely about a girls must have - mascara! 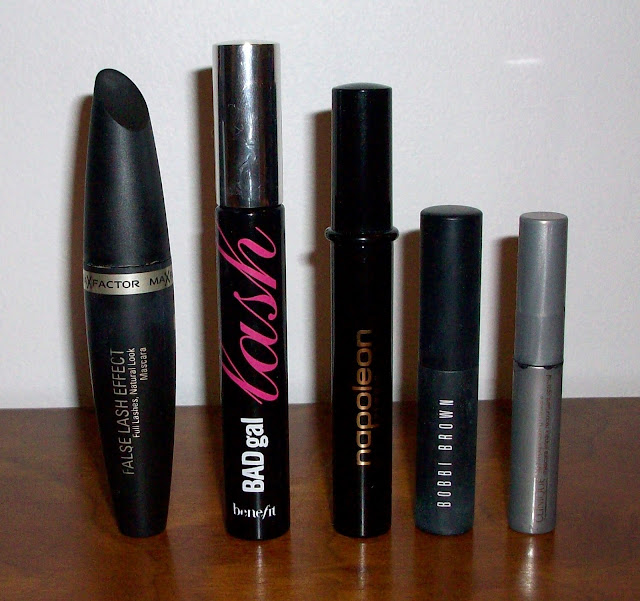 Max Factor - False Lash Effect
I purchased this because Lisa Eldrigde uses it in lots of her videos and after using it I understand why. It is a fantastic 'drugstore' mascara. The brush is quite large with rubber bristles. It really adds volume and length to the lashes. Will repurchase in the future.

Benefit - Bad Gal Lash
When I first tried this mascara, I was really not impressed. The formula is a mousse and drier than a normal mascara. The brush is massive which can make it a little difficult to apply. What I love about this mascara is how black it is. I would consider repurchasing.

Napoleon Perdis - Ah-Mazing Lash
This was a GWP with a magazine sometime last year. The brush on this is a rubber one that balloons out on the end. It makes it a horrible mascara to use. You get too much on the lashes that the ballooned out end hits but none on the rest of the lashes. Would not purchase and I am not even sure it is for retail sale.

Bobbi Brown - Lash Glamour Extreme Lengthening
This sample size came in a subscription box ages ago. It is good for lengthening the lashes but doesn't add an volume which is what I like. Would not purchase.

Clinique - High Impact Curling
I usually love Clinique mascaras but this was a real disappointment. The curved shape of the brush means too much mascara is on one side of the brush but none on the other side. Very glad this was part of a GWP and I would not purchase it. 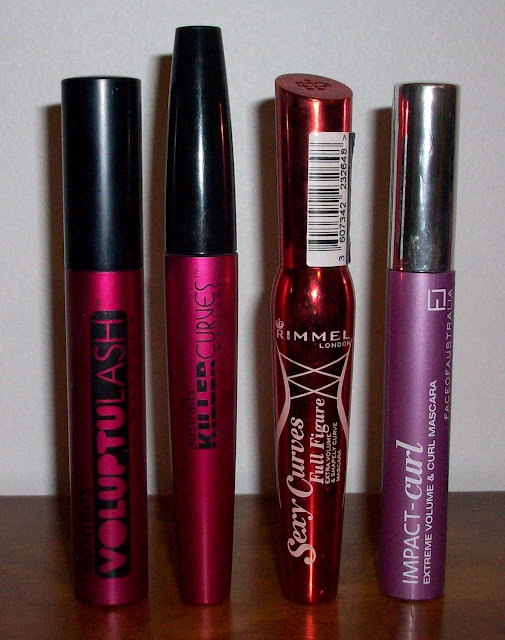 Australis - Voluptu Lash
This has a comb like brush that I found really annoying. It seemed to clump my lashes up and apply too much mascara. Would not repurchase.

Australis - Killer Curves
Unlike the Voluptu Lash mascara, I really liked this. It has a rubber hourglass shaped brush that adds length, volume and curl. Would repurchase.

Rimmel - Sexy Curves Full Figure
I am not sure how I got this mascara. I think I won it. The brush shape looks really cool - it is like three circles but it doesn't pick up enough mascara. Does not provide the 'full figure' it promises. I found it quite a natural looking mascara. Would not purchase.

Face of Australia - Impact-Curl
This mascara has an almost identical brush to the Kiler Curves mascara. The formula is just as good too. Would consider repurchasing.

Ah, finally a new blog post! I hope June will be better for blogging regularly. I have lots of products I want to share with you including items from Tom Ford, Chanel and Nars. Will probably do a post on my new nail polish storage too - I love it.

What did you finish up in May? What is your favourite mascara?

Posted by Stephanie at 9:56 pm

Email ThisBlogThis!Share to TwitterShare to FacebookShare to Pinterest
Labels: Au Revoirs, Empties, May