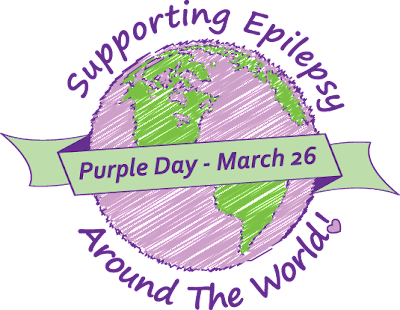 "Purple Day (26th March) is a global effort dedicated to raising epilepsy awareness. Purple Day was founded in 2008, by nine-year-old Cassidy Megan of Nova Scotia, Canada. Motivated by her own struggles with epilepsy, Cassidy started Purple Day in an effort to get people talking about the condition and inform those with seizures that they are not alone. She named the day Purple Day after the internationally recognised colour for epilepsy, lavender." Purple Day Website


Today's post is a step away from my normal beauty ramblings. However it is something important to me and I feel a need to share with you - I hope you will stick around to read this post. Above is a photo of my older brother Jake and myself. Jake will turn 26 this year. He had uncontrolled epilepsy and has since he was 6 years old.

Jake contracted encephalitis when he was 4, it is an infection of the brain (similar to meningitis which is an infection of the fluid around the brain). Jake spent around 6 weeks in the Royal Children's Hospital Melbourne. Much of that time was spent unconscious and to be honest it was lucky that he survived. Due to the scaring the encephalitis left on his brain he has had epilepsy since then.

Jake's epilepsy is not controlled. This means he still has seizures even though he is on medication and has a vagus nerve implant. He can go around a week without a seizure or he can have 20 in a day. There is no way of predicting when he will have a seizure or what type it will be.


A seizure is a little difficult to describe as the seizure everyone has differs. It usually involves loss of control of body movement and often a loss of consciousness  A seizure can last for anywhere between 30 seconds to more than 5 minutes.

Epilepsy can make life difficult as Jake's is uncontrolled it can be dangerous for him to be left completely alone. He could just drop and have a seizure anywhere (and I mean anywhere). Injuries from falling when suffering a seizure are very common for epilepsy sufferers - Jake fell when he had a seizure on Sunday, he now requires surgery to fix it. Epilepsy also limits what he can do - he can't have a normal job and he can't drive (something that makes him very annoyed). Luckily we live in a supportive environment and there are some opportunities for him.

At this stage there is no cure to Jake's epilepsy. He is not a candidate for traditional brain surgery as he doesn't just have one area on the brain that is scarred - it is multiple places. Numerous medications have been tried and some have helped but not cured (some have also had some terrifying consequences too). For now, we as a family hope for something new and miraculous to be created. There is some hope with a new treatment called 'deep brain simulation' that has had some promising results. However it is not available to Jake at this time. Fingers crossed for the future though! 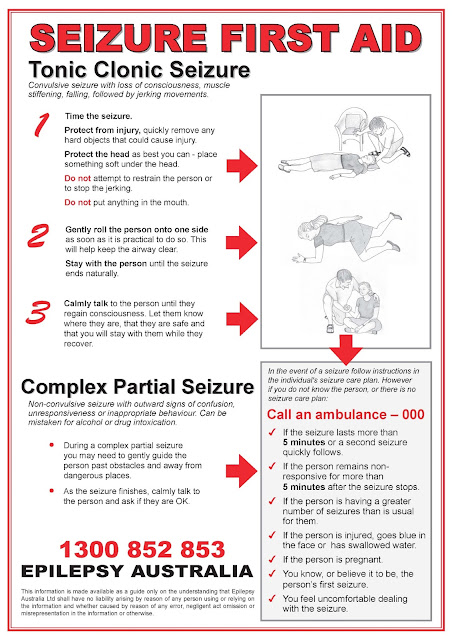 I haven't written this post to tell you that you should donate money to Epilepsy Australia (though that would be great if you did). I have written it to help fulfil the aim of Purple Day - increase awareness of epilepsy.

A seizure is something many people are frightened, don't understand or just don't know what to do when they see one. Seizures can be confusing to see - a lot of the time it just looks like the person is on drugs or is drunk. I want you to have some understanding of epilepsy so if the need arises you would know how to help someone. The above first aid poster is a great resource (click on it to enlarge it).

Just a couple of other things I would also like to mention:

Thank you for reading this post - it means a lot to me. If you have any questions feel free to ask below.

For more information you can head to the Epilepsy Foundation of Victoria's website (or do a quick Google search to find your states/countries organisation).

Posted by Stephanie at 9:08 pm